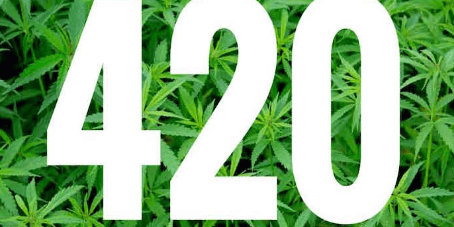 People from all over the world spark and toke up to celebrate the special day. We want to invite everyone to come check out our dispensary to see what deals and fun we are getting into on 420. Click here to see our Online Menu. Celebrating 420 has always held a special place in the cannabis community because it became the unofficial calling card, a time dedicated to the plant. Enthusiast know, once 420 rolls around, the marijuana gets rolled up.

Looking for information surrounding 420 can be a little frustrating because there is no clear origin of the phrase “420”, but that’s where we come in. At Nature Med, we’ve researched a few popular myths regarding 420. Leave a comment letting us know what is your favorite 420 origin story.

While it is true that 420 is shrouded in mystery, one of the most common origin stories revolves around an ensemble of teens out in California. The story goes, they would regularly meet at a wall after school at 4:20. This is when they would begin a habitual smoke session that would later take on a whole new meaning. During a smoke sesh, the group became aware of a map that would lead the kids to a Marijuana plant that was left by a Member of the Coast Guard. All the teens had to do was find the plant and the free bud would be theirs!

Nothing did come of this, but the meeting time 4:20 grew bigger than any plant could. The teens didn’t know it but their slang made it to the main stage. A reporter for High Times Magazine was at a Grateful Dead concert Christmas of 1990. While at the concert, someone handed him a flyer that said, “ “We are going to meet at 4:20 on 4/20 for 420-ing in Marin County at the Bolinas Ridge sunset spot on Mt. Tamalpais.” The reporter was intrigued by the flyer and sent it to High Time. They wrote a story about the event and the rest is history. They were able to help introduce 420 to the world and it hasn’t stopped growing. In hindsight the kids grew up around the Grateful Dead so it’s no surprise that their slang was able to reach such a large audience.

The unofficial holiday is celebrated globally and there are more stories about it’s creation. Another famous origin story involves Bob Dylan. Dylan made a song in 1966 titled “Rainy Day Women 12 & 35.” The legend goes, while listening to the song a person realized, if you multiply 12 by 35 you get…. 420! Sadly, this isn’t enough to label Dylan as the 420 King but you cannot deny the power of the myth.

The complexity of 420 doesn’t need humans to tell the story. Some believe that 420 refers to the best time to plant cannabis plants. Legend says, if you plant a tree on that day you’ll be destined for full flowers and big nugs. Another myth is that 420 is a reference to the amount of chemical compounds found in a single cannabis plant.

The conflicting myth of 420 ensures the legend of the myth will never die. The origin isn’t as important as what 420 symbols today. Cannabis advocates regard 420 as if it were the Black Friday of Marijuana industry. These stories are pieces of legend passed down from generation to generation, solidifying the smokers bond.

Don’t forget to stop by Nature Med on 4/20 to check out our holiday specials and connect with our staff. You can also visit our website to see our Online Menu. Leave us a comment below letting us know your favorite 420 myth.

The Difference Between CBD and THC and Why it Matters
June 23, 2022

Chemical and Pesticide Usage in Cannabis Cultivation, and Why We Don’t Do It
June 15, 2022